News and Updates for Paris-Nice 2012

Stage 8 results: Lieuwe Westra puts in a great TT ride, but Bradley Wiggins beats him by 2s to claim the stage and the overall win

Vacansoleil-DCM fires on all cylinders at Paris-Nice — cyclingnews

PresseSports Stage 8 — letour.fr
March 10 update: The pass (Col d'Èze) that overlooks the French Riviera will determine the final results; the 9.6 km @ 4.7% uphill time trial will determine if Bradley Wiggins is the best rider in this year's race. Lieuwe Westra is just 6 seconds back. The climb undulates with several step sections so riders are opting for regular road bikes with clip-ons. The Col d’Eze time trial was the traditional finish used to decide Paris-Nice but not recently. Eddy Merckx was the first winner of Col d'Eze back in 1969. For this year's stage details, see the stage profile, map and timetable in the race summary table (right). — Steve

Wiggins One Step Away; Leipheimer's hopes derailed by crashes — teamsky

Leipheimer Crashes out of Contention at Paris-Nice — velonews

7 Big Photos from Stage 7 — reuters/sirotti
March 9 update: Paris-Nices of recent have finished with a road stage into Nice, but this year it's the pentultimate stage as a time trial returns to the final day. Often a break succeeds on this stage; however, this year the run up to the flat finish in Nice is easier with less climbing. Past winners in Nice the last four years, all of them from breaks, were Thomas Voeckler, Amaël Moinard, Antonio Colom and Luis-Leon Sanchez, yesterday's winner. For this year's stage details, see the stage profile, map and timetable in the race summary table (right). — Steve

Carlos Barredo successfully attacked his breamates during the run into Sisteron during the 2008 Paris-Nice
March 8 update: After the transfer to the stage 6 start in Suze-la-Rousse and the 177 km course to Sisteron we'll be close to Nice at the end of Friday. Sisteron is known as the gateway to Provence because it's situated in the narrow gap of two mountain ridges, however, Stage 6 will avoid the big mountains. There are five categorized climbs on Friday, but nothing difficult and the finish is flat. (see climb details below)

In 2008 when Paris-Nice followed a similar profile into Sisteron, a large group of 17 riders got away. In the run to the finish it was wheedled down to about 6 before Carlos Barredo launched a successful solo attack with about 5 kms to go to capture one of the biggest wins of his career. (photo above). For this year's details, see the stage profile, map and timetable in the race summary table (right). — Steve

Van Garderen down, but not out after Mende losses — cyclingnews

Westra wins in France but celebrations may prove costly — cyclingweekly.co.uk

In 2010 at Paris-Nice, on this same finish, Alberto Contador beat Alejandro Valverde (2nd) by 10s and Levi Leipheimer (28th) by 1'09". (Leipheimer is not good on short, steep climbs.) With no Alberto Contador this year and Alejandro Valverde in good form, he'll be the favorite for this stage. However, it will be a cold, windy day so something unexpected could happen.

The Stage 5 finish host, Mendes, is located in the Cévennes, a great unhearlded cycling area. Someday I'll post some of our recreational ride photos.

See the Google earth and streetview climb links below for details on Thurday's categorized climbs. Also, see the stage profile, map and timetable in the race summary table (right). — Steve

Wiggins ready for all takers on Mende — velonews

Big Photos from the 2010 finish at Mende — sirotti

March 7 update: Stage 4 features a lumpy course heading southeast into the Midi-Pyrénées with a finish in Rodez (pictured left), a popular stop for the Tour de France. The second half of the stage is very classic-like with short, twisty hills including one near the finish. More than half the field is more than 7 minutes down on GC, so there are plenty of riders eligible for the big break of the day and sprinter teams may not be chasing. Thomas De Gendt (Vacansoleil-DCM), Carlos Barredo (Rabobank) and Rémy Di Gregorio (Cofidis) are all riders who have won Paris-Nice stages from breaks in the recent past and are pre-qualified to make the break on Wednesday (ie are in the lower half of the general classification). See the stage profile, map and timetable in the race summary table (right). — Steve


Stage 3 results: Alejandro Valverde (Movistar) chips away at Bradley Wiggin's lead with 10 bonus seconds by edging out Simon Gerrans on the uphill finish at Lake Vassivière

March 5 update: After leaving Vierzon, Stage 3 will be straight and flat for the first half as we continue to head south to the Méditerranéen. When we enter the Haute-Vienne department at the end of the stage, the race will encounter two cat 3 climbs including the narrow, hilltop finish at Le Lac de Vassivière just east of Limoges. (See the climb stats just below).

Lac de Vassivière has hosted the Tour de France stages three times (in 1985, ’90 and ‘95) and the August UCI stage race Tour du Limousin (2.HC) often finishes here. It's also a popular recreational cycling area. At the heart of the Limousin region and the Millevaches Regional Natural Park, Lake Vassivière extends over 1000 hectares of water and a 45 km shoreline in a protected environment.

I initially thought this would be a good finish for Alejandro Valverde (Movistar) + 30s, who needs to chip away at Bradley Wiggin's lead. However, the climb (5.2 km at 3.9%) likely isn't steep enough to shake out all the power sprinters especially since the last km is only 2.7% average grade. Instead, it might be good finish for Valvarde's teammate Jose Joaquin Rojas who was second on stage 2. The narrowness of the road up to Lake Vassivière will add some stress for the GC guys. See the stage profile, map and timetable in the race summary table (right). — Steve

Wiggins in command at Paris-Nice — cyclingnews

March 4 update: A flat stage with some long straight sections on the way south to the finish in Orléans, which New Orleans in the U.S. is named after. This stage should end in a sprint but crosswinds could easily change that. Marcel Kittel (Project 1T4I) will be the favorite if it comes down to a field sprint. See the stage profile, map and timetable in the race summary table (right). Steve

Nick Nuyens crashes at Paris-Nice but determined to continue — cn

Paris-Nice: A race with history that really sticks in the mind — guardian


Stage 1 results: Gustav Larsson (Vacansoleil-DCM) benefits from an early start time as rain hampers the favorites including Bradley Wiggins (Sky) who finished 1s back for second 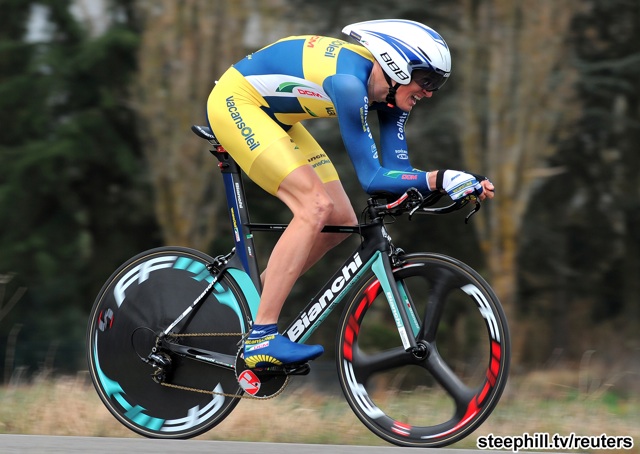 Far from ideal start for Martin in Paris-Nice ITT — cyclingnews

The morning scene at the start host for stage 1 of Paris-Nice (photo w/ permission: robert schmidt)
March 3 update: A 9.4 km west to east individual time trial course outside of Paris with one cat 3 hill at the beginning. 90% chance of light rain forecasted. Bradley Wiggins said at Volta ao Algarve last month that he has early Tour de France form. He was going to be one of the favorites for this stage anyways. See the stage profile, map and timetable in the race summary table (right). Steve

Paris-Nice: A race with history that really sticks in the mind — guardian.co.uk

Gerrans: GreenEdge in the mix for Paris-Nice — cyclingnews
February 29 update:

2011 Big Photos from all 8 Stages — reuters/sirotti

Drama to the last for Paris-Nice — cyclingnews


January 25 update: Details for the 2012 Paris-Nice were leaked before the official announcement scheduled for the coming days. See the race summary (right) and the route map below. — Steve

March 3 update: A work in progress for Paris-Nice 2012 live video. Check back at race time for the latest live links and feel free to send in additional sources for live video or tv coverage as they become known. — Steve Paris-Nice variations depending on the language: Paris-Niza (spanish), Parigi-Nizza (Italian), Parijs-Nice (Dutch), Paris-Nizza (German).