News and Updates for Tour of Qatar 2012

Cavendish wins again in Qatar — cyclingweekly.co.uk
February 9 update: Tom Boonen won the finish in Al Khor Corniche last year from a small break much like he won yesterday's finish at Madinat Al Shamal. The peloton is expected to have 8 mph crosswind for this stage. — Steve

Boonen too good for Veelers and Cancellara in Qatar — cyclingnews

Stage 4 photos — cyclingnews
February 8 update: Of all of the 2012 Tour of Qatar stages that can be affected by the wind, this is the one to keep an eye on. After all we finish in Madinat Al Shamal and a "shamal" is the name for a northwesterly wind blowing over Iraq and the Persian Gulf states which is often strong during the day. However, as we head north to the tip of Qatar, the wind isn't suppose to be major factor. — Steve

Stage 3 photos — cyclingnews
February 6 update: The riders will drive to the other (west) side of Qatar in the morning then cycle back to Doha. The peloton will have to contend with a forecasted 11 mph ENE wind. Tom Boonen will be hoping the crosswind is strong enough to create a split to improve his chances against the pure sprinters. There is apparently a sharp corner near the slight uphill finish at Al Gharafa Stadium. — Steve

February 5 update: Stage 2 is a short (11.3 km) team time trial near the Doha MotoGP course with roundabouts and 90 degree corners according to Eurosport. As usual for this race, only road bikes will be used. Lusail, the host city for this stage, is the newest planned development in Qatar and its proposed a new eco-friendly football stadium will host the opening and final matches of the 2022 FIFA World Cup. — Steve

Injury hampers Renshaw's title defence — smh.au
February 5 update: Every stage of this race is flat that's why there aren't any stage profiles in case you were looking for them here. Stage 1 is an out and back (on different roads) from the suburbs of Doha finishing at the Doha Golf Club. The return leg is expected to have a 11 mph tailwind from the NE. — Steve

First crash of the Tour of Qatar (and more live photos from Erik Dekker) — now.rabosport.nl

Cavendish feverish on eve of Tour of Qatar — velonation

Renshaw must prove his worth — smh.au

Greipel out of Tour of Qatar — cyclingnews 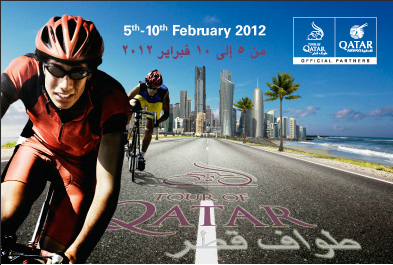 January 25 update: The 2012 Tour of Qatar (Tour du Qatar, Ronde van Qatar), the 11th anniversary of the event, is Sunday February, 5th to Friday February, 10th. Information on the overall route, stage maps and timetables are now posted. No need for profiles with this race as the every stage is dead flat. The team time trial has been moved to stage 2 this year. Expected starters included Philippe GILBERT, Thor HUSHOVD and Taylor PHINNEY from BMC Racing, André GREIPEL (Lotto - Belisol), Tom BOONEN and Francesco CHICCHI from Omega Pharma - Quickstep, Mark RENSHAW (Rabobank) and Mark CAVENDISH (Sky). There will be live streaming video each day — Steve

Cavendish to make Sky debut at Tour of Qatar — cyclingweekly.co.uk

[Thomas] Dekker to open 2012 season at Tour of Qatar — cyclingnews

January 25 update: Listed below are some of the media outlets for the 2012 Tour of Qatar along with links to their tv guide and live coverage. Links get verified and updated prior to each stage. Let me know if you see new options. Please report (email) new links and incorrect or missing information. — Steve