24 Big Photos from Stage 6 — colinflockton
April 6 update: Stage 6 is a rolling ITT but not as hilly as previous years. Kudos for the race organizers for designing a stage race that ends in a ITT where the outcome is very much in doubt. Check out the top 18 on GC below to give you an idea of how wide open this race still is. See the race summary table (right) for the stage profile, map and timetable. — Steve

Only one dream left for Sanchez after Basque Country victory — cyclingnews
April 5 update: Stage 4 is a hilly stage that ends with category 1 uphill finish (max 18%) which Katusha's Joaquin Rodriguez should win and don the race leader's jersey. The finishing Ibardin climb is actually done twice although the first pass is listed as a cat 2 since a steep section has been added for the finish. See the race summary table (right) for the stage profile, map and timetable. — Steve

Sanchez holds off Rodriguez and Horner for stage 3 win — cyclingnews 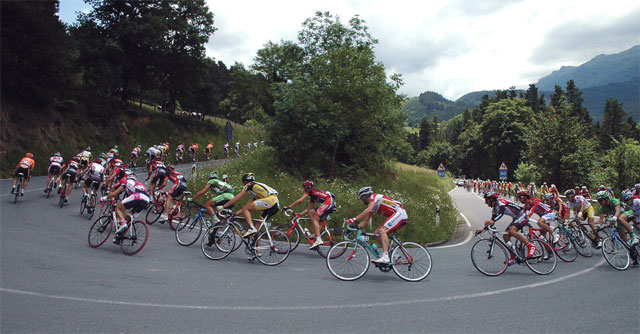 April 3 update: The Queen Stage, like in previous editions of this race, will finish in Eibar, one of the major industrial cities in the Basque country. This is always a brutal stage regardless of where it starts, Vitoria-Gasteiz this year. There are seven catgorized climbs ending with the usual Alto de Ixua, Alto de San Miguel and Alto de Usartza combination before a short, twisty descent finish which appears to have been shortened from 2.5 km to 1.5 km this year. Sammy Sanchez has won this stage the last two years (see banner photo at the top of the page). See the race summary table (right) for the stage profile, map and timetable. — Steve

Stage 2 results: Daryl Impey (GreenEdge) rides off the front of the peloton with 1 km to go and holds on for the win

More Stage 2 Photos — biciciclismo
Stage 2 is also a bumpy stage with a bunch of cat 3 climbs before a descending then flat finish. Rain is forecasted. For more stage details, see the stage profile, map and timetable in the race summary table (right). — Steve


Stage 1 results: Joaquin Rojas (Movistar) squeezes through for the win in Gueñes 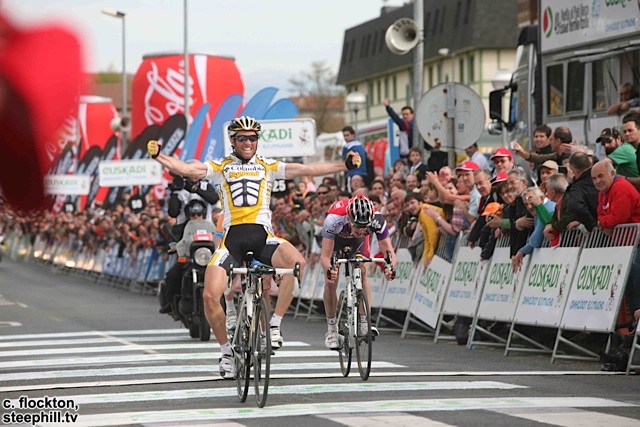 A bumpy stage that should end in a sprint finish although in 2009 Michael Albasini, the recent Volta a Cataluyna winner, won in Gueñes from a three man break (photo above). The former Highroad now GreenEdge rider is on the startlist again this year. For more stage details, see the stage profile, map and timetable in the race summary table (right). — Steve


2012 Tour of the Basque Country Preview

March 14 update: The 2012 route was officially announced last week after the event was rescued from threatened cancellation due to lack of funding which has been resolved. Stage hosts, profiles and timetables for all stages are now posted. See the race summary table (right). As usual a strong field is expected.

Vuelta Ciclista al País Vasco is a stage race held in the Basque Country, a cultural region shared between France and Spain, at the same time the classics are happening in northern Europe, giving riders (mainly climbers) an alternative to the cobbles and cold weather.

Known as the Tour of the Basque Country in English and Euskal Herriko Txirrindulari Itzulia in Basque, the six-day race was first held in 1935, while the modern version of the race took place for the first time in 1969. The race is now organised by the leading Basque newspaper Diario Vasco (official site) which holds a UCI ProTour licence through to 2012. This year's event runs from Monday, April 2th through Saturday, April 7th — Steve

April 5 update: Your 2012 Tour of the Basque Country live coverage options for North America and elsewhere. Check back at race time for the latest live links. Feel free to send in additional sources for live video or tv coverage as they become known. — Steve

Not available yet? Let me know if you see one. — Steve