News and Updates for UAE Tour 2019 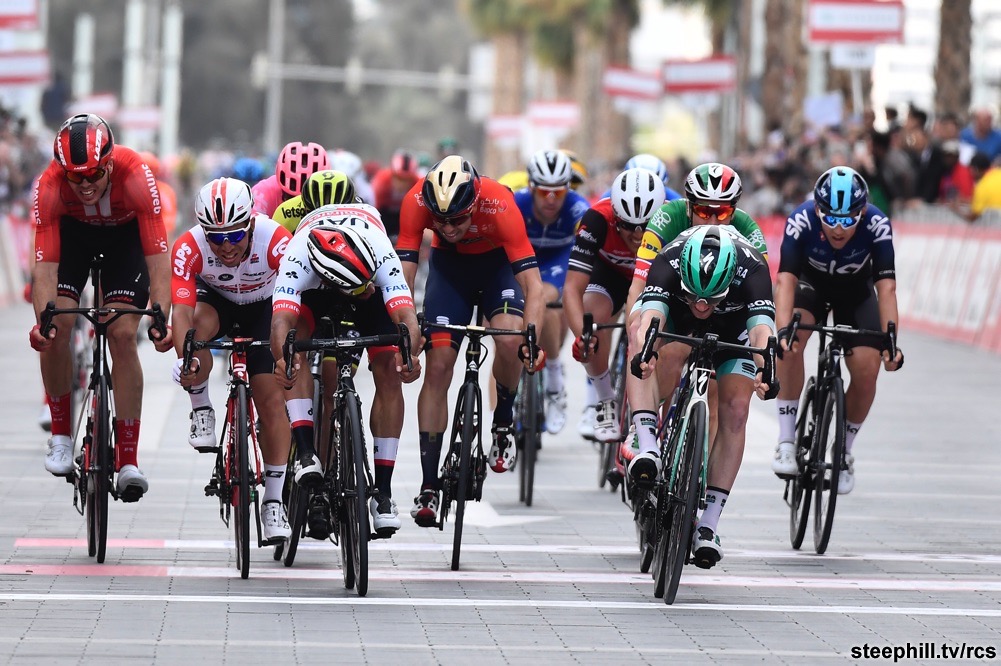 Full Official Stage 7 Results and Final General Classification — rcs
Sam Bennett wins final stage of UAE Tour — cyclingnews
March 1 update: The UAE Tour’s final showdown is through the streets of Dubai, based closely on one of the most popular features of the Dubai Tour. After departure from the Dubai Safari Park the route then grafts on to the familiar course through the Dubai Design District, Mushrif Park, Al Mamzar Beach, Deira, and Rashid Port to reach Jumeirah Road and finish in Citywalk. The final stage is one for the fastest wheels! After leaving Jumeirah Road the route is on wide roads with a final curve at 500m to go, and enters the City Walk, where the finish line is on an 8.5m wide road with square cobblestones. — rcs
Stage 7 Preview with Favorites — ciclismointernacional
See the race summary table (right) for the Stage 7 profile, map and timetable. 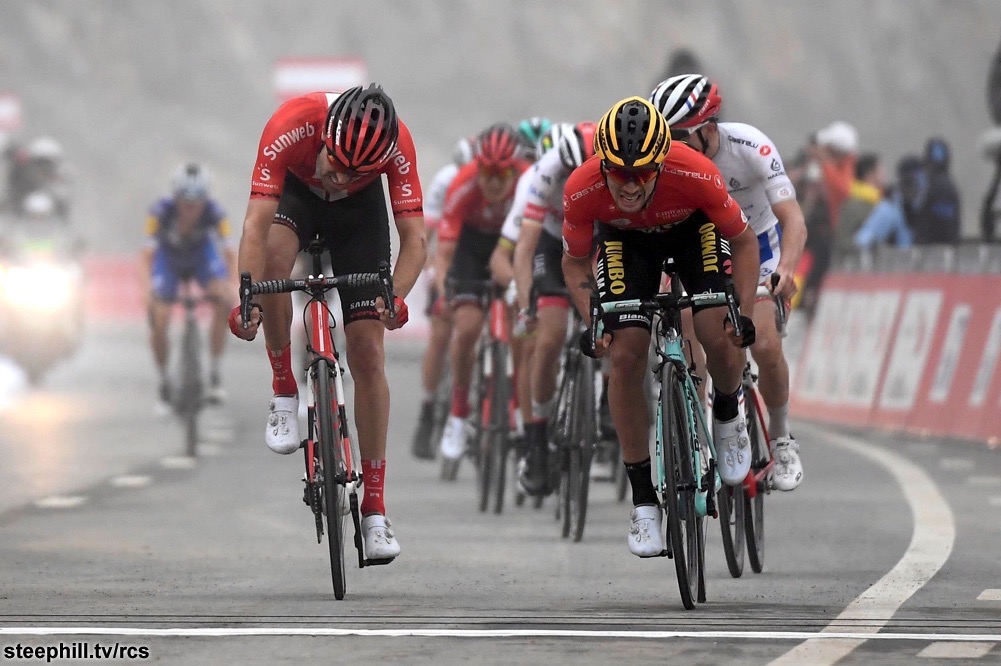 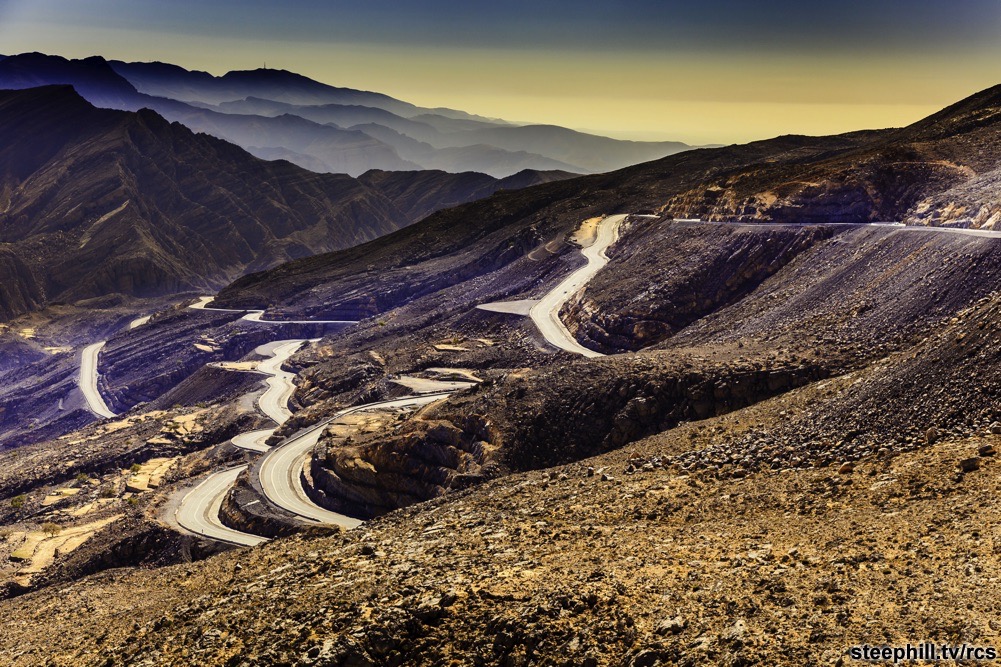 February 28 update: This, the second of the two mountain stages, is likely to be the decisive stage of the UAE Tour. Like Stage 3, it is divided into two distinct parts: the first is a flat approach to the final climb; the second is about 20km of continuous ascent until the finish line. After departure from Ajman, the route crosses Umm-al-Quwain heading towards Ras-al-Khaimah, whose capital is by-passed, as the race heads directly to Jais Mountain. The final 20km climb averages at 5%, and is generally constant with only slightly higher gradients of around 7% in the last 2km. The final climb includes wide hairpins on a very wide carriageway. Gradient is mostly 4-5% in the first part of the climb and around 5-7% in the second, with a maximum of 9% at 2km to go. Final straight on tarmac. — rcs
Stage 6 Preview with Favorites — ciclismointernacional
Think the UAE Tour is a training race? Think again — velonews
Roglic and Valverde go head to head on Jebel Jais for UAE Tour title - Preview — cyclingnews
Riders pedal into the unknown on UAE's tallest climb — velonews
See the race summary table (right) for the Stage 6 profile, map and timetable. 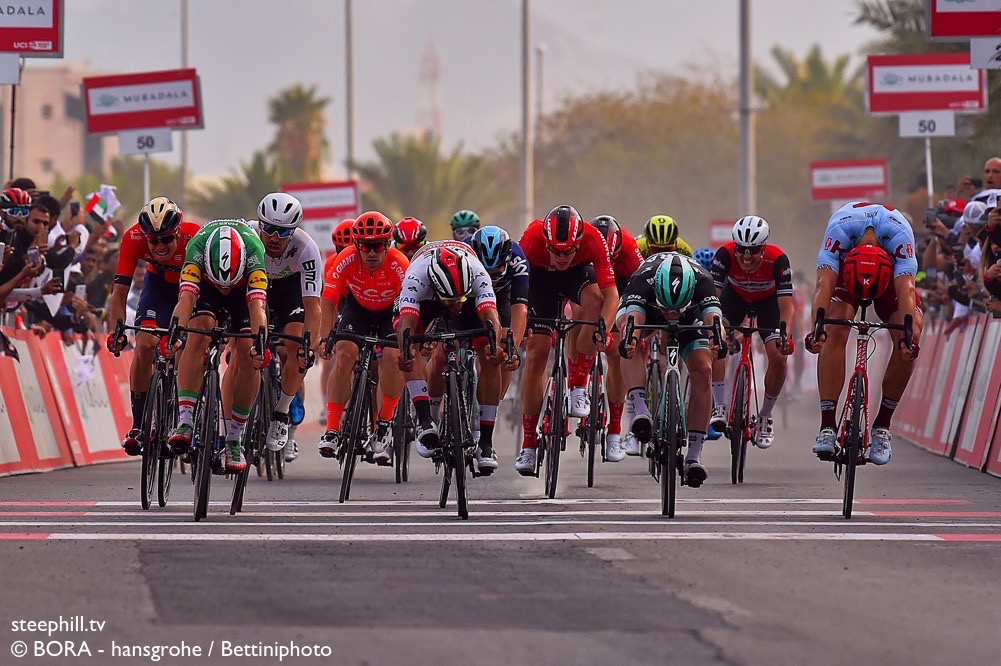 Full Official Stage 5 Results and General Classification — rcs
Viviani wins sprint in Khor Fakkan — cyclingnews
Elia Viviani: ‘We want to show we can beat everyone’ — cyclingweekly
Kittel takes confidence from third in UAE Tour sprint — cyclingnews
Viviani changes tactic to win at UAE Tour — cyclingnews
February 27 update: This stage, that connects the Arabian Gulf with the Indian Ocean (Gulf of Oman), is another opportunity for the sprinters. After crossing the desert between the University of Sharjah and the University of Khalba, the route follows the coast north through Fujairah, up to the finish line in Khor Fakkan, where a bunch sprint is expected. The final 5km are on ample roads, evenly surfaced and with divided carriageways. The final 3km feature several roundabouts, the last of which leads on to the 8m wide, tarmac final straight. — rcs
Stage 5 Preview with Favorites — ciclismointernacional
See the race summary table (right) for the Stage 5 profile, map and timetable. 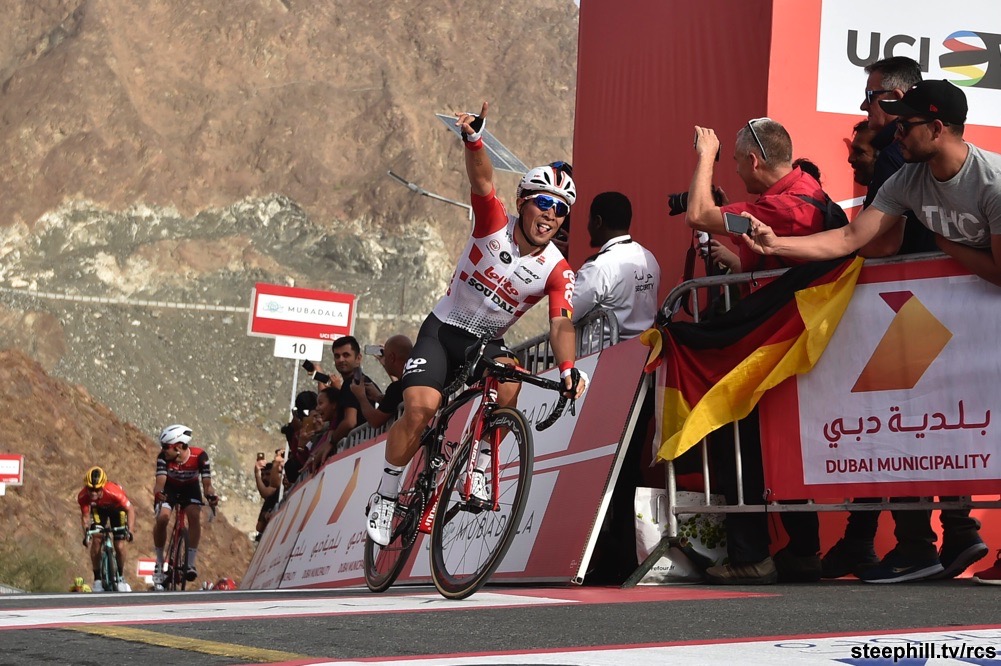 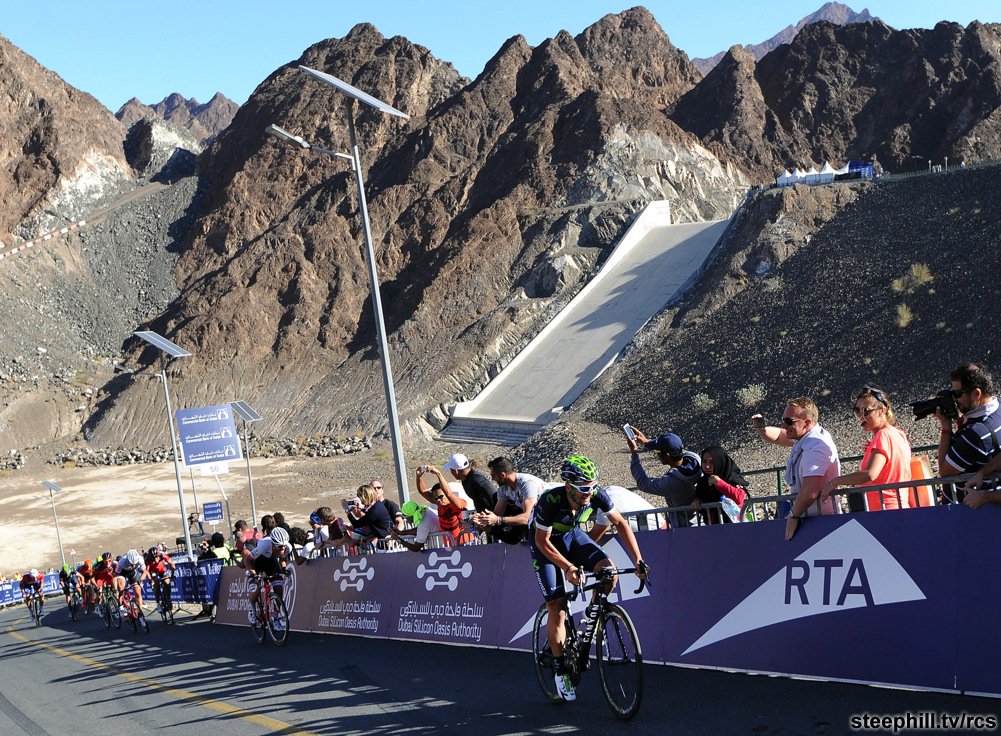 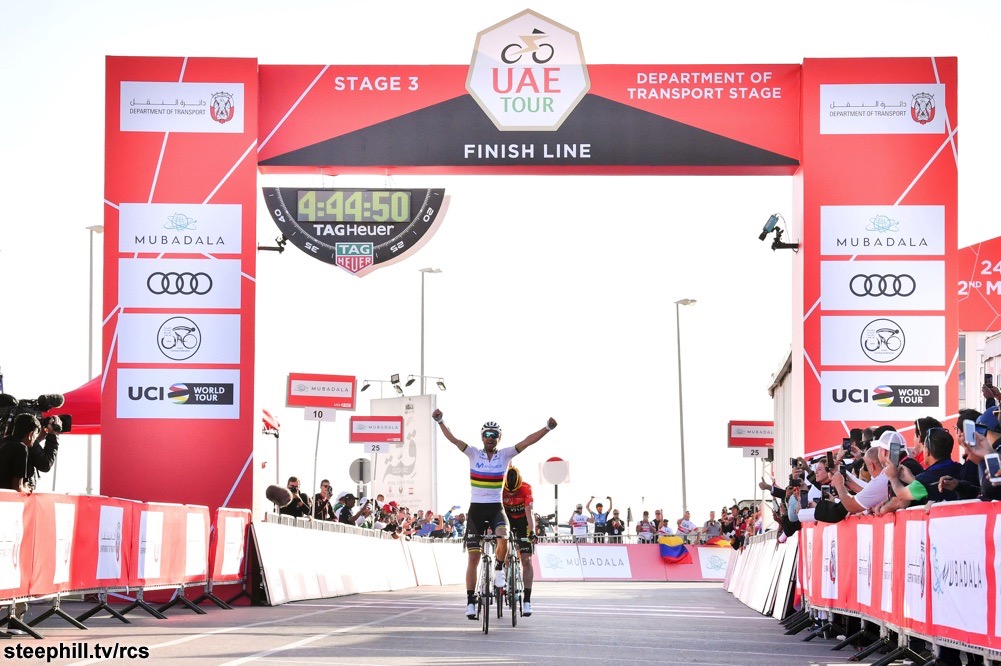 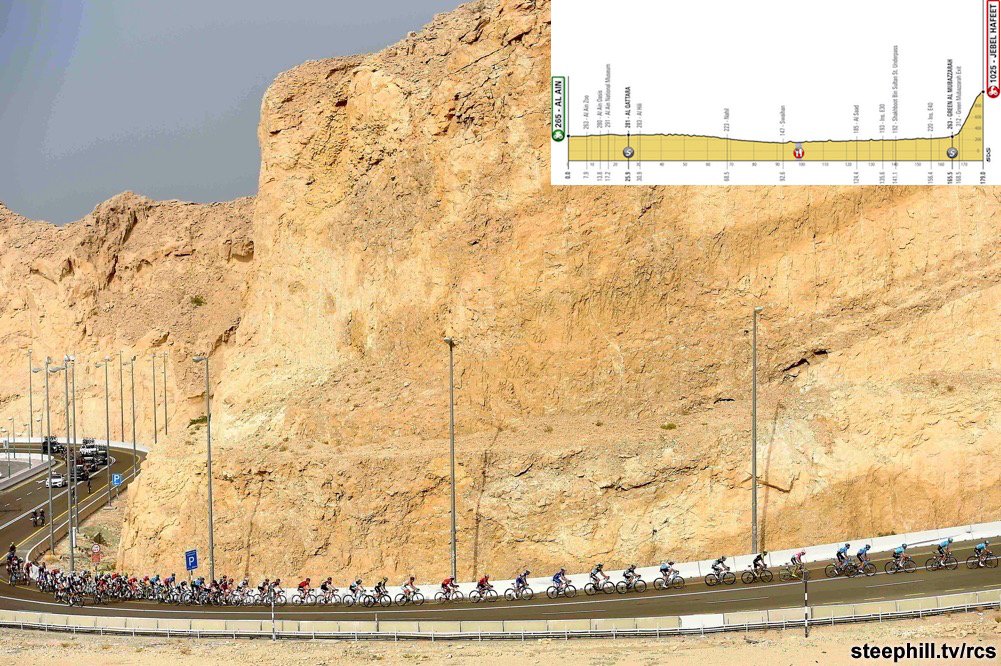 February 25 update: The first of the UAE Tour’s two mountain stages follows another successful course familiar from the Abu Dhabi Tour. The route around Al Ain takes in many of the landmarks – including Al Ain Zoo, Al Qattara, Al Hili and Al Ain Oasis – goes up to Green Mubazzarah where the final climb of Jebel Hafeet begins, with its 10km that will make the first real selection of the race. The final climb goes through a series of wide hairpins on a three-lane carriageway. Gradient around 8-9% with a maximum of 11% at 3km to go. Very short descent on the final km just before the last climb. Final straight on tarmac. - rcs
Photos from last year's Jebel Hafeet mountain finish - Alejandro VALVERDE wins — rcs
Dan Martin: Expect fireworks and tricky tactics in UAE Tour finale — cyclingnews
Stage 3 Preview with Favorites — ciclismointernacional
See the race summary table (right) for the Stage 3 profile, map and timetable. 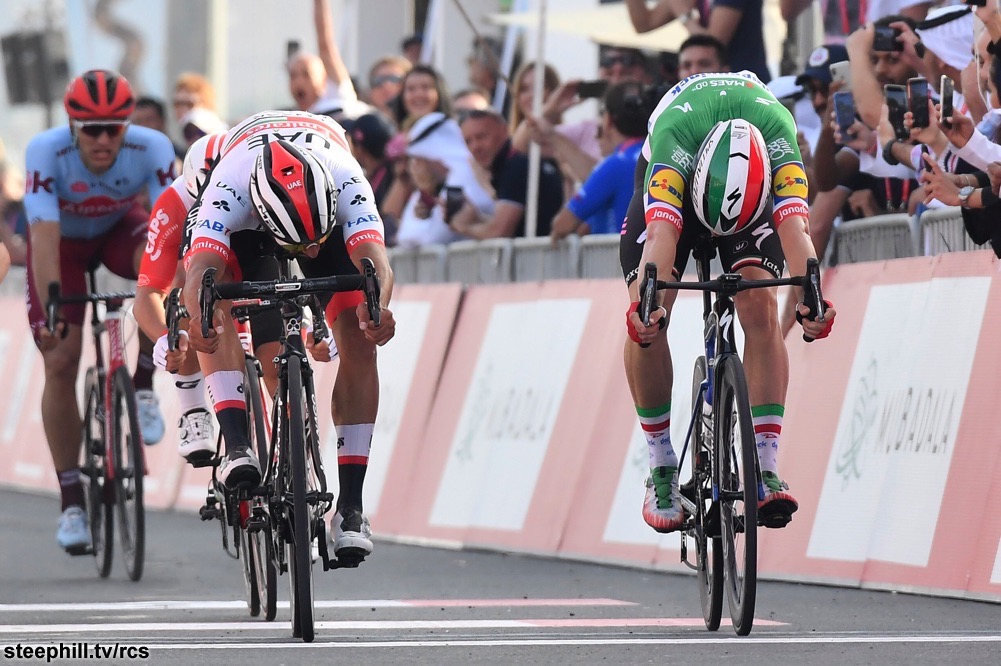 Full Official Stage 2 Results and General Classification — rcs
Gaviria wins stage 2 — cyclingnews
Fernando Gaviria: ‘Kristoff among best sprinters in the world, today the best lead-out rider’ — cw
Viviani: Gaviria was the strongest today — cyclingnews
February 24 update: Raced around the streets of the city of Abu Dhabi, Stage 2 follows one of the classic Abu Dhabi Tour stages. Starting from Yas Mall, the first part of the route in the northeast part of the city heads towards Khalifa Port, where there is a U-turn on the pier. The riders return to the city along Channel Street and then they ride through from Yas Island to Saadiyat Island, past the Louvre Abu Dhabi and the Corniche until the reaching the finish line at Abu Dhabi Breakwater for what is expected to be the first sprint of the race. The final 5km are all on wide roads with gentle semi-curves that lead to the final straight on tarmac. — rcs
Stage 2 Preview with Favorites — ciclismointernacional
Photos from last year's finish at Big Flag - Phil BAUHAUS wins — rcs
See the race summary table (right) for the Stage 2 profile, map and timetable. 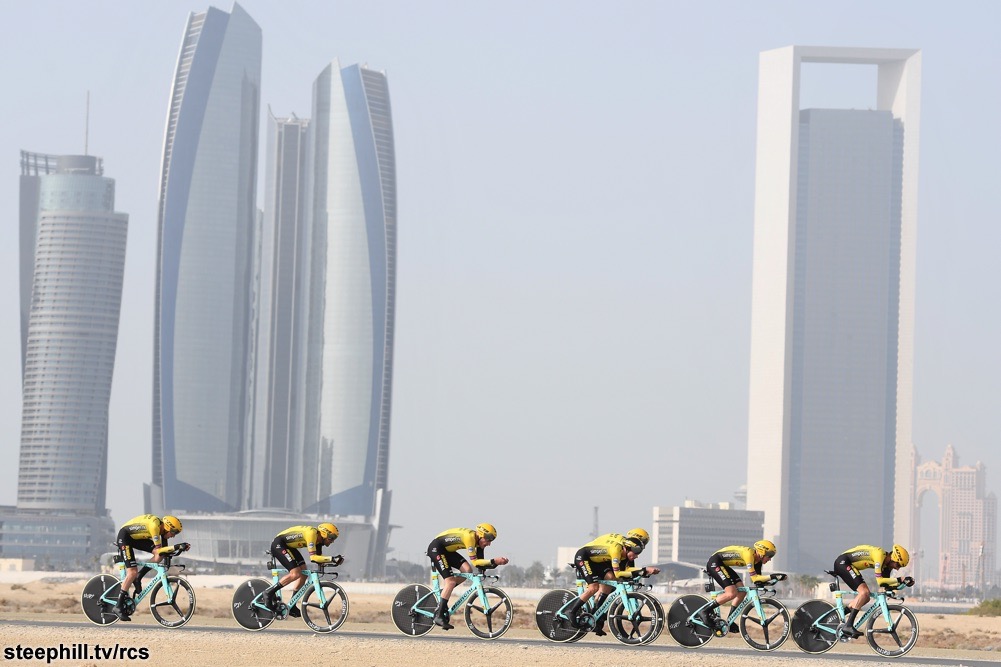 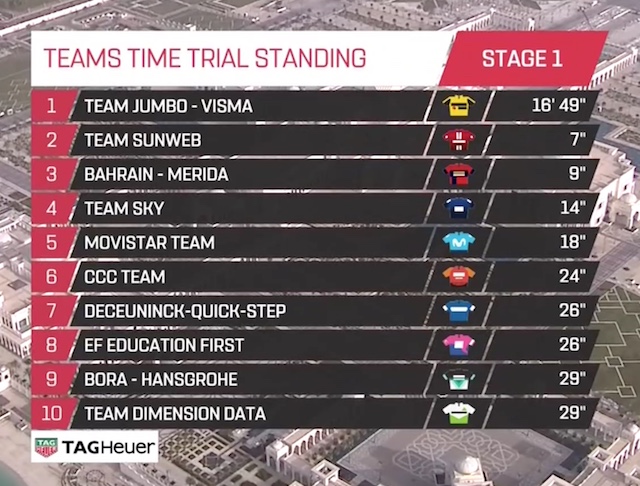 Jumbo-Visma wins UAE Tour TTT — cyclingnews
February 22 update: The Team Time Trial will be raced at Al Hudayriat Island, a brand new (man-made) leisure and entertainment destination. The stage has a very fast course combining the two different cycle path loops of 5 and 10km, with straights punctuated only by two U-turns around km 3. The road is perfectly flat, wide and with wide-angle turns that will enable the teams to keep a very high speed: expected speed averages are over 55km/h. The island is also very exposed to ocean winds.
Stage 1 Preview with Favorites — ciclismointernacional
Start Order and Times for Stage 1 TTT (CET) — rcs
See the race summary table (right) for the Stage 1 profile, map and timetable. 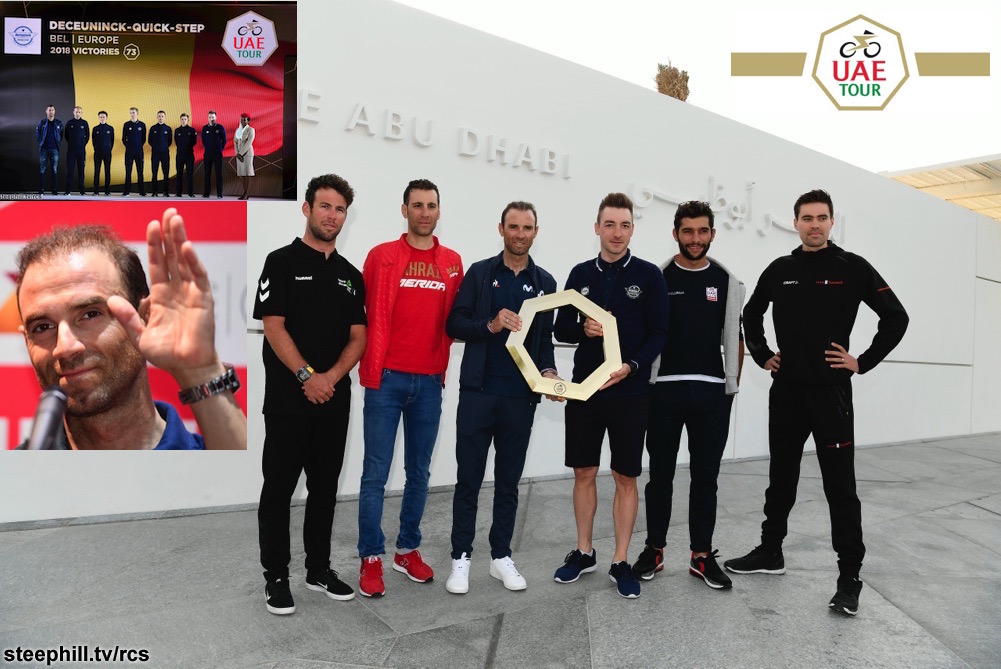 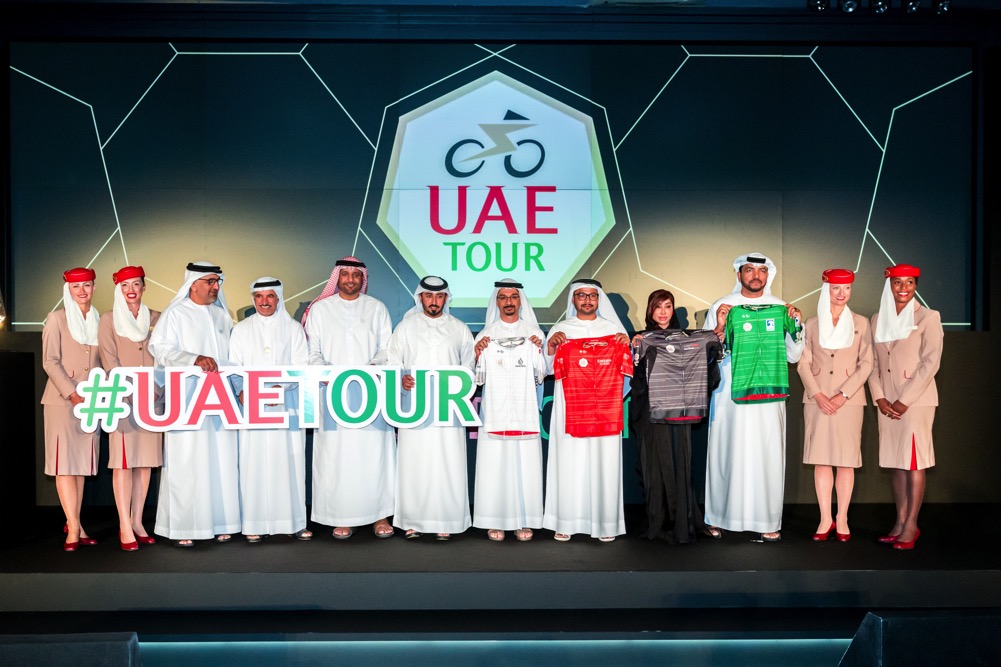 February 20 update: A work in progress for 2019 UAE Tour live and delayed coverage. Most live feeds will be country restricted, but unrestricted links will appear in bold. Check back at race time for more links. Feel free to send in additional sources for live video, tv coverage or text updates/tickers as they become known. — Steve

Stage maps are posted in the race summary table .